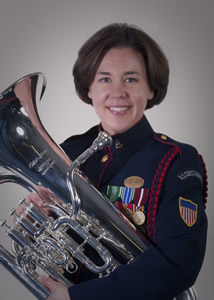 Chief Musician Bonnie Denton began playing the euphonium at the age of 9 in her hometown of Fairfield, IL. She soon began dreaming of a life-long career in music, and at the age of 16, left home to pursue that dream. Denton earned her high school diploma from Interlochen Arts Academy in Interlochen, MI, a bachelor’s degree in both music performance and education from Ithaca College in Ithaca, NY, and began graduate studies at the Eastman School of Music in Rochester, NY. While attending Eastman, Bonnie won a position with the United States Military Academy Band at West Point, NY, and served in the Army for three years. While at West Point, Bonnie married Coast Guard Band tubist Richard Denton and moved to Connecticut at the end of her enlistment. She continued to teach and perform and also earned a degree in massage therapy before joining the Coast Guard Band in December 2006.