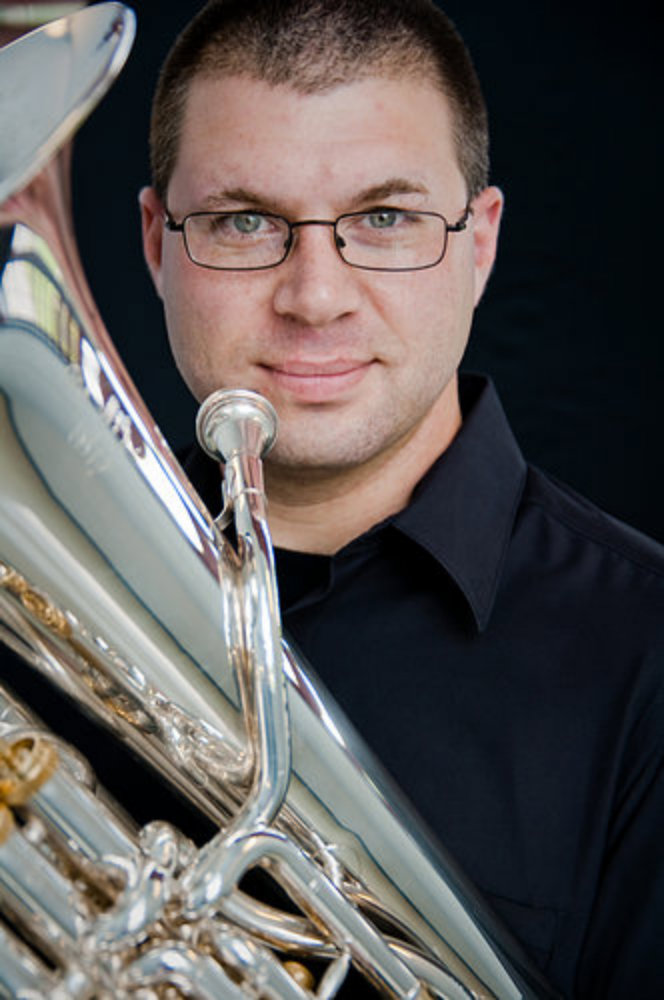 Now in his twelfth year with the West Point Band, Jason Ham has established himself as one of America's most active euphonium soloists. Originally from Columbia, South Carolina, Jason began his studies of the euphonium in high school, garnering many local and state awards for his playing. Jason attended college at the University of Georgia where he studied under the late Dr. David Randolph and David Zerkel. While at the University of Georgia, Jason was the winner of the Atlanta Brass Society Collegiate Soloist Competition (1998), as well as a finalist in the Music Teacher's National Association Competition (2000). In June of 2001, just before completing his studies at UGA, Jason won a position with the United States Military Academy Band, to be followed by his winning the Solo Euphonium Artist Competition at the International Tuba and Euphonium Conference just two months later. (Lahti, Finland). Jason has twice been invited to judge this competition, both in 2004 (Budapest, Hungary), and 2006 (Denver, Colorado, USA).
Today, Jason is recognized as one of the instrument's most visibile proponents. Although the majority of his work has remains in the United States, he also has taken the euphonium to numerous other countries throughout the world (Argentina - 2007; Bulgaria - 2005; Canada - 1998; 2007; China - 2004, 2012; Colombia - 2013; Finland - 2001; France - 2003; Hungary - 2004, 2005; Macedonia - 2005). In the USA, Jason mainly makes visits to college and university campuses throughout the nation, and to this end, has visited more than 100 different schools in his decade as a soloist. Consistently in demand as a clinician and soloist, his travel schedule often finds him on tour at various times throughout the year.

As a teacher, Jason does the majority of his teaching through the John J. Cali School of Music at Montclair State University in Montclair, New Jersey. His roles there include teaching the euphonium majors, teaching a practicum class for the Tuba and Euphonium Majors, conducting the Brass Band, and conducting the Tuba-Euphonium Ensemble. Now entering his fifth year on faculty there, Jason first taught at MSU from 2008-2011, departing after the birth of his son that spring. He returned in the fall of 2013 and remains there today. Accomplishments as a teacher include sending two tuba-euphonium quartets to compete in two different International Tuba-Euphonium Conferences (2010 - Tucson, AZ; 2014 - Bloomington, IN) as well as hosting the Northeastern Regional Tuba-Euphonium Conference in 2011.

Jason stays very busy commissioning composers to write for the Euphonium and to this end, has had some truly outstanding works written for the instrument. Past commissions include works by Stephen Anderson, Johan de Meij, David Gillingham, Amanda Harberg, Pete Meechan, Joseph Turrin. Current collaborations are in the works with Patrick Burns and Ben McMillan.

Jason's most recent accomplishments include his second solo performance at Carnegie Hall on June 9, 2014. In that performance, Jason soloed with the New York Wind Symphony, performing to great acclaim. His prior perfmorance had taken place in April 2009, soloing as a guest of the New York City Wind Band Festival.

Jason Ham is a Yamaha Performing Artist, and performs exclusively on the YEP-842 Euphonium.