Professor of Tuba/Euphonium at Indiana University Southeast, CEO of Just For Brass & Just For Winds

or visit Pat at PatStuckemeyer.com 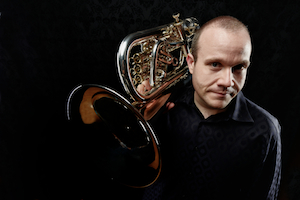 As one of the leading voices in a new generation of musicians, Pat Stuckemeyer's diverse career has taken him to a dozen countries and three continents.  Originally from Indiana, Stuckemeyer was awarded the Doctor of Musical Arts degree from Arizona State University in 2010.  He holds additional degrees from the Conservatory of Music at Capital University, the University of Kansas, and the Royal Northern College of Music.

Currently the President and Founder of Just For Brass & Just For Winds (www.justforbrass.com/www.justforwinds.com), Pat shares his passion for business and entrepreneurial skills, as well as  his extensive knowledge of pedagogy and repertoire with musicians the world over.  Stuckemeyer formed Potenza Music Publishing (www.potenzamusic.com) in 2007 with his wife, and bassoonist, Mary and currently represents over two-hundred composers and artists worldwide.  As President of Potenza Music, Pat enjoys working with composers to bring new music to audiences everywhere.

Being constantly artistically creative both as a soloist and chamber musician, Pat is a founding member of Eufonix, Tuba Quartet 2.0, and has released two recordings with the group: End Game, and Brink.  A third recording is slated to be released in the Summer of 2013.  In addition, many people have written for the talents of Pat Stuckemeyer as a performer and soloist, including: James Barnes, Jonathan Newman, Stephen Roberts, Peter Meechan, Noah Taylor, Anthony Zilincik, Damian Montano, Daniel Nelson, and Donald Grantham.  Stuckemeyer has released three solo recordings.  His debut album, Just For Fun, was released in 2005 with Ellen Bottorff (piano) and Justin White (trumpet).  A second disc, Stepping Stones for Euphonium, Vol. 1, encompassed formative repertoire for euphonium and has been heralded as the 'ultimate teaching tool' for the instrument.  His latest solo offering, Footprints with the Arizona State University Wind Ensemble, encompasses a two-year commissioning project, was released in 2010, and was a finalist for the acclaimed Roger Bobo Award for Excellence in recording.

Pat is an artist and clinician for Besson and Buffet Crampon and performs exclusively on the Besson Presige 2052-S euphonium.  As a tuba clinician and performer, he performs exclusively on the Besson 983 Eb tuba.  His signature line of mouthpieces are available from Mike Finn Mouthpieces.  Dr. Stuckemeyer credits his success to his formative teachers: K. Kim Fillingim, Thomas Zugger, Paul Droste, Scott Watson, Sam Pilafian, Patrick Sheridan and Steven Mead.